By Sammy Hammork on December 23, 2013 in Blog
Thank you all for your prayers for Isaac. He’s been sick for about two months and hasn’t responded to any treatment that he’s been given so far. This week we went to a hospital in Eldoret that has more tests and specialist available because Isaac was getting worse instead of better. His blood oxygen level was half of what it should be and his pulse was double. He was struggling to breathe and was refusing to eat. The doctors at the public hospitals in Kenya have been on strike for two weeks, so we were there for five hours and never saw a doctor. They told us that Isaac should be admitted, but told us to go home instead because there were no doctors available to treat him. 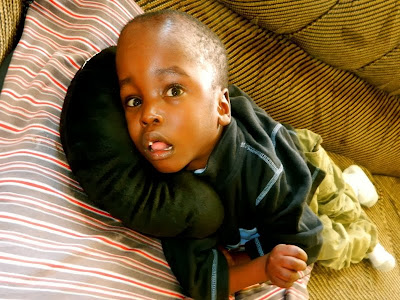 So they next day I ran around to all of the different doctors at their private offices in Kitale to see if I could find someone who could give me a diagnoses. After looking at his chest X-rays I found a doctor who told me that he has Chronic Bronchitis or Chronic Obstructive Pulmonary Disease. After finding out what his exact problem was we took him to Sister Freda’s Hospital, which is a private hospital, so the doctors don’t go on strike. He was admitted and they began giving him another round of antibiotics and IV fluids. After being there two days he is already improving. He has been eating well for the past two days and they said that he can come home tomorrow.
We still have a long way to go with Isaac because his medical issues are chronic and will not fully go away, but we are glad to see small improvements and hear his sweet laugh again. 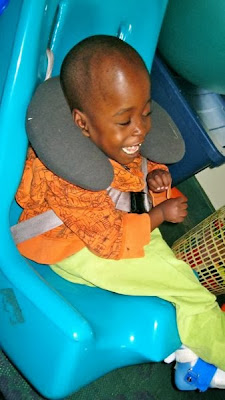 We are blessed and thankful for all of your continued prayers for Isaac.